Warning: count(): Parameter must be an array or an object that implements Countable in /home/customer/www/7xbeef.com/public_html/wp-content/themes/7beef/single-tasting_events.php on line 50 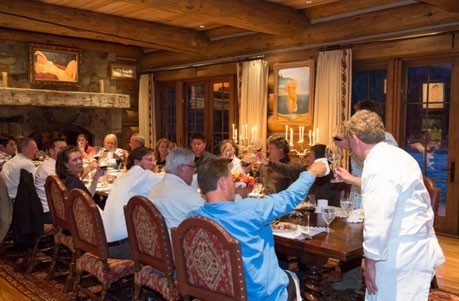 On May 29, 2013, Aspen’s top chefs gathered at Elk Mountain Lodge in Aspen to celebrate the launch of 7X Beef. Representing such famed Aspen establishments as Cache Cache, Piñons, The Little Nell, and Hotel Jerome, the chefs dined on dishes by 7X  Executive Chef Gilbert Pepin, including 7X sliders, steak tartare, New York strip with asparagus salad, and a mixed grilled with 7X tenderloin and ribeyes.

It’s hard to keep a chef out of the kitchen, so when they weren’t tasting, Aspen’s culinary stars took turns observing — and occasionally working — the outdoor grill and the range.

The event was a great time for the chefs to socialize prior to their busy summer season, and — as if to remind them that summer had not yet arrived —the sunny skies gave way to a late-season snowstorm midway through the event.
At least two of the chefs, Rob Zack of Hotel Jerome and Chris Lanter of Cache Cache, already have 7X on their summer menus. We expect many others to join them soon.