Previous
• Back To Chefs • 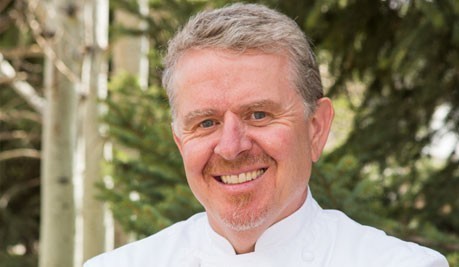 Gilbert Pepin is the Executive Chef of 7X Beef.  He has been working with this extraordinary product for more than two years testing and perfecting the cooking method.

Some people were meant to be chefs, and Gilbert Pepin is one of them. And his destiny has nothing to do with sharing his surname with one of history’s most famous chefs.

“My whole family has been involved in the restaurant business one way or another,” says Pepin. “At 13, I started working in a family friend’s restaurant, and never looked back. It’s a life-long passion for me, and I’ve never had any regrets or indecision about a life in the kitchen.

Trained in the culinary arts during high school in Massachusetts, Pepin got his first big break while he was still in college when a string of coincidences — and a one-way ticket — landed him an apprenticeship at Le Reve D’Alsace in Morangis, France. In subsequent years, he took stages at Fauchon and La Maree in Paris and cooked on Cape Cod during the summers, experiences that gave him the chops to take over as an executive chef at Regatta Restaurants in Falmouth and Cotuit, Massachusetts. From there, his growing reputation took him to Australia’s Bondi Beach, the Hawai’ian island of Lanai, and eventually into the private kitchens of the Palm Beach, Florida area. After stints as personal chef for collector William Koch and racer Jeff Gordon, Pepin ventured back into the public realm in 2003, opening the highly regarded Restaurant 902 Main in South Yarmouth, Massachusetts.

“I’ve been fortunate enough to travel the world cooking, picking up techniques and new flavors wherever I go,” says Pepin. Today, his cooking style is fresh, healthy, local and sustainable, grounded in a seasonal French tradition. “People tend to think of European cuisine as overly fancy and sauce-heavy, but it was France that I learned the value of amazing ingredients, and letting them speak for themselves.”

In 2008, Pepin was lured back into William Koch’s culinary fold, where his cuisine is paired nightly with selections from Koch’s legendary wine collection. During the formation of 7X Beef, Pepin was called upon to develop menus built around the product years before it was available to the public.

“It’s a truly amazing meat, unlike anything else I’ve ever seen,” says Pepin. “I’m a truly lucky guy to have the best beef in the world as part of my everyday pantry.”

And he doesn’t just enjoy cooking 7X — it helps fuel his very active lifestyle. Pepin skis some 50 days a season, is a passionate road cyclist, and spends any other free time mountain biking or hiking in the mountains of Western Colorado. “It’s a rare day that I stay inside,” he says. “Food is fuel, and this beef is seriously high-grade fuel.”